More about the history of Pilates 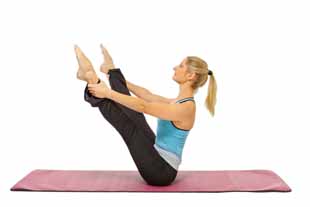 The Pilates Method trains the deep muscles, improves the posture, rebalances a lean and supple body and hightens body awareness. It’s a combination of strengthening, stretching and relaxing exercises. A gentle and very effective training method for body and mind with flowing movements. Coordination and balance exercises are incorporated and so it is a reliable opportunity to prevent injury and back pain. With the different props and apparatus the training stays varied and it is a perfect addition to endurance training. It is suitable and beneficial for people of all ages.

With the Reformer, the most popular of the equipment, you can do exercises, that are not possible on the mat. Therefore you experience a whole new dimension of training. Through the resistance the training results are faster than on the mat. The Chair and the Tower extend the repertoire and are some other apparatus to experience more challenging exercises. I also added the TRX for more strengthening exercises.

The focus on the different Pilates Principles help to improve the effectiveness of the method through the precise execution of the exercise.

The focus lies on the quality of the movement not on the number of repetitions. You train the whole body not just some muscles. The visualization and images help the movement to more precision.

Joseph Hubertus Pilates was born 1883 in Mönchengladbach, near Düsseldorf. As a child he was sick and weak but found a way to improve his health and to strengthen his body. He tried out many different types of sport like boxing, gymnastics, skiing, swimming, self defence and body building. He was also interested in yoga and tai-chi. Eventually his body was so athletic, that he stood as model for anatomical drawings.

1912 he moved to England. In 1914 during the 1st World War he was interned in a camp and he trained the other prisoners. That’s where he started building on his apparatus made of hospital beds. He also developed a rehabilitation program for the disabled from the war.

After the war he went back to Germany to train the police in Hamburg. When they offered him to train the military, as a devoted pacifist, he emigrated to New York. There he opened his first studio with his future wife Clara in the same building as the New York City Ballet. His method, that he called Contrology, became an insider tip for many dancers and performing artists. He taught until his death in 1967.